Halle an der Saale, Germany – Moroccan super welterweight Mohamed Rabii (10-0) outscored Mexican Jesus Gurrola (27-14-3) over eight. Rabii won on scores of 78-74, 79-74 and 79-73 in what became a tactical fight with Gurrola waiting for his opponent – but waited for too long and only in the second did he score with his apparently heavy left hook.

Rabii was careful after not to walk into any traps and this made for a good boxing match but not much action. In the third the referee told both men to pick it up and Rabii did so while Gurrola kept moving along the ropes waiting for the right moment – which never came.

Rabii, an excellent amateur, is trained by Ben Davison, managed by Benedikt Poelchau and promoted by SES. 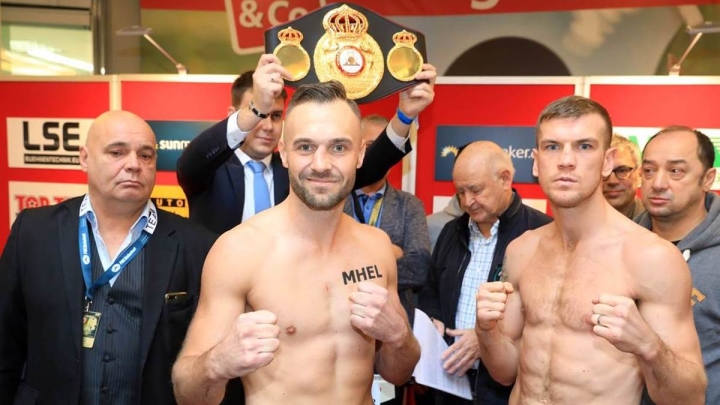 Light heavyweight Tom Dzemski (14-0) stopped Hungarian Zoltan Sera (32-21-1) 7 seconds into the fourth when the towel surprisingly came in from Sera´s corner. Dzemski was dominating the fight and floored Sera late in the second but it was more of a slip than anything else. Sera was holding a lot and Dzemski, the son of former NBA middleweight champ and now SES trainer, Dirk Dzemski, could never really hurt his opponent.

Cruiserweight prospect Roman Fress (9-0) stopped Czech veteran David Vicena (12-27-2) 1.27 into the first round of scheduled six-rounder. Vicena took just about every punch coming his way on his chin and was heavily floored, he got up but was hurt and took more punishment and it was correctly stopped. Vicena looked soft and unprepared.

Fress had former WBO super middleweight champ Robert Stieglitz in his corner and looked sharp but then again Vicena looked every bit a faded journeyman just in it for a final payday.

SES´ show at the Messe Arena opened with a fight for the vacant WBO European heavyweight title. Erik Pfeifer (7-0) wore down Bosnian Adnan Redzovic (21-4), who didn´t come out for the sixth round due to a claimed hand injury.

He was a spent force by then and was rattled by steady 1-2 combinations from Pfeifer. Radzovic had his moment in the third when he floored the German with a right and while Pfeifer got up and got through the round he was hurt for real. After that it was all downhill for the 42-year old veteran as Pfeifer upped the pace and kept a steady pressure on his opponent.

Pfeifer was a a top class amateur who have turned pro late and at 32 it might too late to make it to the top – especially if there is a fragile chin involved.

‘The Professor’ gets high marks as student of boxing

Imagine if One partner really wants to offer the homely house...

Wesley Snipes Opens Up About His Scrapped Black Panther Movie