A great cooperation in a great atmosphere. On the occasion of the recent Düsseldorf Grand Slam, the German Police Sports Federation (DPSK) and German Judo Federation (DJB) signed an important protocol for a cooperation: “Police and Judo in Germany”. 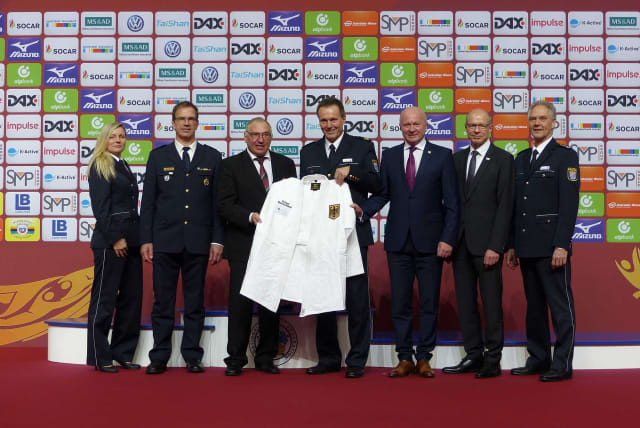 DPSK-President, Ralf Flohr, and DJB-President, Peter Frese, met together and finalized the Memorandum of Understanding. Both presidents hold a Judogi with German national emblem and “Polizei Deutschland” as a symbol of this new agreement.

As a first step, the preparation of the upcoming European Police Judo Championships, which will be held in May 2019 in Gyor, Hungary, will be organized together by the DJB and DPSK. Talkings had already been taking place between the German national coaches, Richard Trautmann, Claudiu Pusa and Johannes Daxbacher from DPSK, to nominate a strong German Police Judo team.

Stefan Marginean, Manager of the IJF Military and Police Commission (MPC), joined this important meeting and was very happy about this great effort in Germany and congratulated his commission-colleague Johannes Daxbacher. 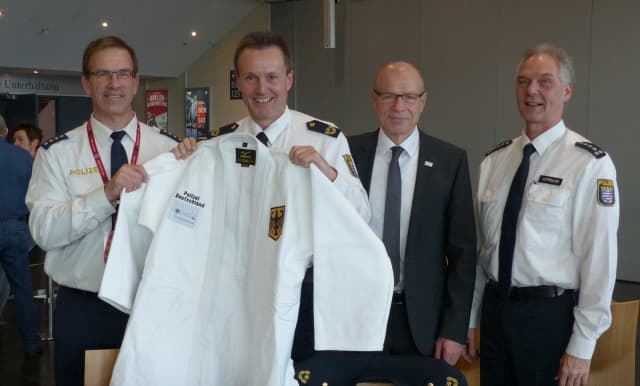 Stefan Marginena explained: “The MPC has been involved, since 2012, when the IJF signed a MoU between the International Military Sport Council (CISM) and the International Police Sports Union (USIP), in a process of implementing judo in the Armed Forces and Police Structures in as much countries as possible. In order to achieve this process there is a need of establishing a frame of cooperation, on international level as well as on national level, through a document on which the involved parties emphasize the needs and each party’s responsibilities. We consider that the signature of a protocol between the IJF or National Judo Federation and the MoD and / or MoIA is very important in order to implement Military and Police Commission Projects and as a consequence the IJF Academy programmes.“

After the signature in Düsseldorf, Johannes Daxbacher gave some more information about the protocol: “We will actively cooperate with the DJB in the field of sport and we will organize common judo events.” 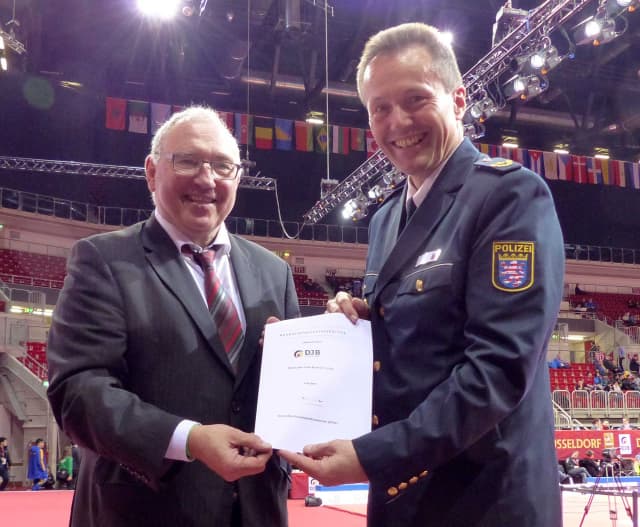 But this agreement, which is a good example for other countries to see the fruitful cooperation between two national bodies, does not limit itself only to the sports dimension: “We will also improve the communication and the public relations. Many athletes can have a double career, as top judoka and as police officer. We need to inform the public about the opportunity they have to join the police. We want to reinforce the respect and self esteem of everyone, but we also believe that people can join the police and then start judo”, added Daxbacher.

Today the DPSK organizes national police Judo championships, including a mixed team competition (since last year), and participates with a German Police Judo National team in the European Police Championships. The Judo techniques are useful for Police Forces in intervention. Judo can be used as a tool for a smarter conflict resolution and the Judo values such as respect are also important in the communication between Police and society.

Is Muay Thai a Good Workout? Here’s What You Need to...