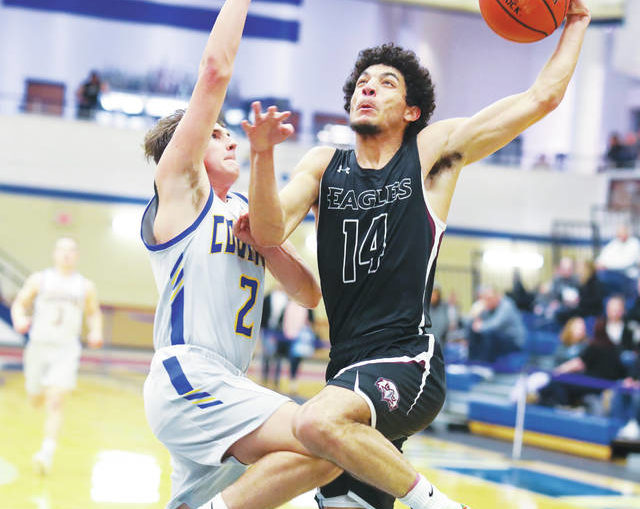 The Eastern University men’s basketball team battled Stevens for the top spot in the MAC Freedom Conference last Saturday in Hoboken, N.J., and sophomore Draig Ruff had his first double-double of the season with 14 points and 11 rebounds. But it wasn’t enough as the Eagles dropped a 75-61 decision to fall into second place.

Ruff, a 6-foot-3, 175-pound guard from Kingston and a Wyoming Valley West graduate, has started all 23 of the team’s contests and leads Eastern in scoring with 12.5 points a game. He’s also averaging 5.3 rebounds with 66 assists, 37 steals and 11 blocked shots.

“Draig has been a major reason for our success this year,” coach Dan Pruessner said. “He is in the top 10 in four statistical categories in our conference. That, in itself, defines who he is as a player.”

Ruff doesn’t average 20 points a game but consistently scores in double figures along with rebounding, assists, steals and blocks. And he will always defend the best player on the other team.

“Draig’s personality also is a crucial part of our team,” Pruessner said. “He’s always lightening the mood and consistently has a smile on his face.”

Ruff is majoring in the university’s tough engineering course.

“It’s crazy how he manages his time on and off the floor,” the coach said. “There are a lot of student-athletes that can’t do what he does.”

The Eagles are 15-9 overall and 10-3 in league play and will host a MAC Freedom semifinal game next week.

The senior finished second out of 31 runners in the mile for the women’s indoor track team at the Samford Bulldog Open last weekend in Birmingham, Ala. Her time was 5:10.27. The Hazleton Area graduate also finished 11th out of 40 in the 800-meter run with a time of 2:20.55.

Buehrle’s personal best in the mile (5:07.4) was recorded at the Bulldog Open last year. Her top effort in the 800 (2:18.43) came when she finished 15th in the Southern Conference Outdoor Championships in 2018.

The 6-foot-10, 225-pound junior has played in all 27 games with 16 starts for the men’s basketball team, the Terriers 16-11 overall and standing in second place with a 10-4 in the Patriot League after a 77-54 league victory over Navy last Saturday.

Mathon, from Shavertown and a graduate of New Hampshire’s Holderness School, had four points, four rebounds, two assists and a steal in the game. On the season, he’s averaging 4.9 points and 4.9 rebounds with 29 assists.

The senior, a Pittston Area graduate, and indoor track teammate Tamar Bourdeau, at Coughlin graduate, made up half of the team’s DMR which finished first at the Fastrack National Invitational last Saturday. The time was 12:19.90, which is the fastest the group has recorded this winter.

It was the only event that Mayers competed in. Bourdeau also finished 14th in the 400 meter dash invite with an impressive time of 59.75.

In his first season with the wrestling team, the Dallas graduate is coming into his own at the right time. Monk is 6-11 overall and 5-8 in dual meet action but won his bout 9-3 in a 40-6 triumph over Davis & Elkins last Saturday, went 1-1 in the Mountain East Conference Championships on Feb. 1 and took a 6-4 decision in a 43-0 shutout of Lander on Feb. 5.

The Braves host the Division III Super Region I Tournament on Feb. 29 in Pembroke.

The freshman finished fifth out of 32 entrants in the 5,000-meter run for the women’s indoor track team at the Doug Raymond National Qualifier last weekend in Kent, Ohio. Her time was 18:02.57 and she was the first year runner to cross the finish line.

Bellucci, from Pittston and a Scranton Prep graduate, finished 12th in the 3,000-meter run with a time of 10:22.24 at Penn State’s Sykes and Sabock Challenge on Feb. 8. Both times were her best of the season.

The true freshman scored a 5-1 decision at 165 pounds but that was the only victory for the wrestling team in a 50-3 loss to SUNY Cortland on Feb. 9.

The Dallas graduate posted a 1-1 record for the Giants in a double dual meet against King’s and Scranton last Friday in Wilkes-Barre. He won his match with a pin in a 37-17 victory over King’s, but he dropped a 4-3 decision in a 43-5 loss to Scranton. Geiger is 19-5 on the season.

The 5-foot-7 sophomore guard has started all 23 games for the women’s basketball team, the Knights 12-11 overall and 7-7 in MAC Commonwealth play after a 72-65 league victory over Hood last Saturday. The Crestwood graduate had 13 points and seven rebounds in the game.

She had 23 points in an 80-77 overtime victory over Lycoming on Feb. 8. She’s averaging 11.7 points and 6.7 rebounds a game. Senior Holly Daveski of Wilkes-Barre (Scranton Prep) is averaging 7.4 points and 3.7 rebounds.

The 5-foot-11 freshman guard has started all 23 games for the men’s basketball team, the Monarchs 13-11 overall and 6-7 in MAC Freedom play. The Tunkhannock graduate had a team-high 15 points in a win over Wilkes on Saturday, all coming on five made 3-point baskets.

Get pumped, brother, for this week’s wrestling-themed Fan QuaranTourney – 104.3 The Fan

Why Almost Everything You’ve Learned About Top Personal Statements Is Wrong...

Creep Gropes Woman in Elevator, He Would Have Never Expected This...