Scores were 59-54 twice and 59-53 in favor of Kyshenko, who racked up several major titles over the course of his still active 90-fight kickboxing career. 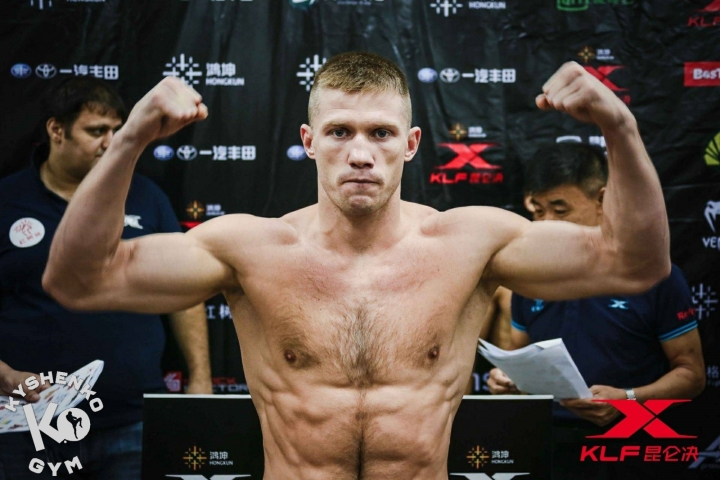 It took a round or so for Kyshenko to settle into his new role. Berrocal did his best to exploit the debutant’s nervous energy, the well-seasoned southpaw landing straight lefts as Kyshenko constantly bounced on his toes in search of a home for his right hand.

A brief shift in tide came in round two. Kyshenko was able to stick and move, scoring with right hands and immediately darting out of harm’s way. He remained in pocket just long enough to take a left hand from the 32-year old Colombian, reopening a cut on his lip which he already sported on his way to the ring.

Of greater concern was a cut just outside his left eyelid, although ultimately not becoming a factor. Kyshenko offset the wounds with an intensified attack in the closing seconds of round two, a left hand sending Berrocal to the ropes and another forcing him to cover up just before the bell.

The round ending sequence was enough to force Berrocal on the defensive for the balance of the fight. Kyshenko scored with leaping right hands, literally jumping inside to land his power shots. A relentless power surge led to the bout’s lone knockdown, an onslaught of clean shots punctuated by a left hook which finally forced the stubborn Colombian to the canvas in the final minute of round four. Berrocal managed to beat the count of referee Raul Gonzalez and make it out to the bell, but with the ringside physician’s undivided attention during the one-minute rest period.

The fight doctor was kept busy, as he was called upon to examine a leaking cut over Kyshenko’s right eye in round five. A quick examination gave the rookie a clean bill of health, though also providing Berrocan with a sense of urgency and a clear target as repeatedly scored with jab-left hand combinations.

Berrocal has now suffered the straight defeats, falling to 17-6 (16KOs) with the latest loss. As for Kyshenko (1-0, 0KOs), it’s a successful venture into boxing following a stellar kickboxing career and with room for growth as a super middleweight rookie, should he choose to stick it out in the sport.

The bout served as the opening bout on DAZN’s first-ever boxing card in the Spain market.

Also on the card, Samuel Molina maintained his perfect record while defending his regional lightweight title with a one-sided 6th round stoppage of local pug Ivan Tomas (9-2-1, 3KOs) in a battle of Spanish prospects.

Molina, who hails from the historic coastal town of Malaga, floored his countryman with a crisp left hook in round two, never letting his foot off the gas from that point onward. Tomas was far too brave for his own good, twice examined by the ringside physician but eating too many right hands from Molina (14-0, 5KOs) for the referee’s liking, forcing the stoppage at 2:12 of round six.

Jake Donovan is a senior writer for BoxingScene.com, Twitter: @JakeNDaBox

Get incredible deals on these popular tops

Valentina Shevchenko: Halle Berry attending UFC 247 ‘was one of the...

nomad - February 11, 2020
0
Halle Berry got to witness her friend Valentina Shevchenko’s masterclass victory over Katlyn Chookagian firsthand in Houston, Texas at UFC 247 on...

Daisy Ridley’s Stunt Double Was Just As Excited to Become a...