Martial artist, Shihan Shannah Robin has been inducted into the World Karate Union Hall of Fame as International Humanitarian of The Year for his hard work and commitment in helping people around the world.

Robin told Dominica News Online (DNO) that it is his honour to serve young people.

“I was inducted as international humanitarian of the year,” he said. “I was inducted in my third karate Hall of fame by the world karate union for my hard work and commitment, with discipline and passion for helping people around the world in a positive way.”

Robin continued, “It’s an honour to serve young people and contribute to the development of everyone who I come into contact with on a daily basis.”

He said being an ambassador for Dominica is a huge honour because he is able to put his country on the map of the world in sport tourism through martial arts.

Robin is the founder and CEO of Universal Martial Arts Academy International Robin Ryu. He is also a seventh degree black belt in Robin Ryu karate system and holds black belts in many other forms of Martial Arts.

Robin is a former high school teacher and educator, motivational speaker, author, fight choreographer and 2014 recipient of the Meritorious Service Award of the Commonwealth of Dominica.

The martial arts teacher operates three schools, two in Dominica and one in Canada. 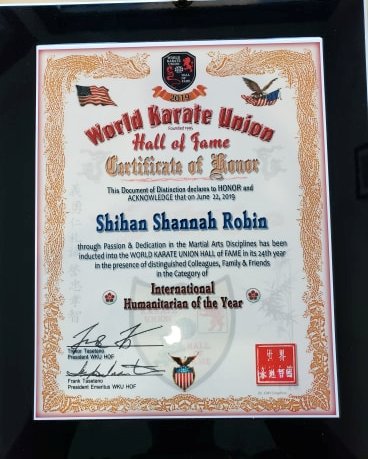 Alex Volkanovski has spent $20,000 to prepare for fight with UFC...