TOKYO — Professional wrestling is booming again in Japan after a prolonged slump in popularity. The turnaround is thanks not to muscular masked men facing off in the ring, but rather a Dutch business executive who fell in love with the sport as a boy.

Harold George Meij was born in the Netherlands, but his family moved to Japan for his father’s work when he was 8 years old. Unable to speak Japanese or English, Meij was alone in a foreign country and unable to make friends.

He found himself enthralled with pro-wrestling broadcasts, where the language barrier did not stop him from enjoying the thrilling displays of colorfully costumed characters. Every weekend he was glued to the TV with his father, who also enjoyed the matches.

He was particularly fascinated with foreign wrestlers like “The White Masked Devil”: The Destroyer, a wrestler from the U.S.; and “The Black Wizard”: Abdullah the Butcher from Canada. The image of these wrestlers grappling with Japanese opponents, their fighting spirits on full display, fired the young Meij’s imagination.

Meij went on to become a talented business executive, taking positions at Coca-Cola Japan, and becoming president and CEO of toymaking giant Tomy in Tokyo. He pioneered new strategies that turned around the struggling company. When he announced he was stepping down in 2017, the company’s stock price fell more than 10% over the next few days in what was called the “Meij shock.” A masked Richard Beyer, a former American pro wrestler known by his ring name “The Destroyer,” fights with Rikidozan in May 1963 in Tokyo.

Several days after he announced his resignation from Tomy, Meij’s mobile phone started ringing. On the other end was Takaaki Kidani, the founder of card game maker Bushiroad. His company had bought New Japan Pro-Wrestling, the country’s largest wrestling promoter, in 2012.

He had an offer the caught Meij totally by surprise. “How about [becoming] president of New Japan Pro-Wrestling?”

At that time the company’s annual revenue was less than 4 billion yen (37.1 million at the current exchange rate). That was just one-fortieth of the 160 billion yen in sales Meij had overseen at Tomy. Pro-wrestling had been struggling for some time, having lost many fans to mixed martial arts organizations like K-1. By 2009, New Japan Pro-Wrestling’s revenue had fallen to just one quarter of what it was at its peak.

Kidani helped the organization get back on its feet. When Bushiroad took over in 2012, it signaled the start of a new marketing strategy. The wrestling promoter’s revenue would jump fivefold over the next six years.

Meij, Kidani thought, was the right person to take the reins at that point. 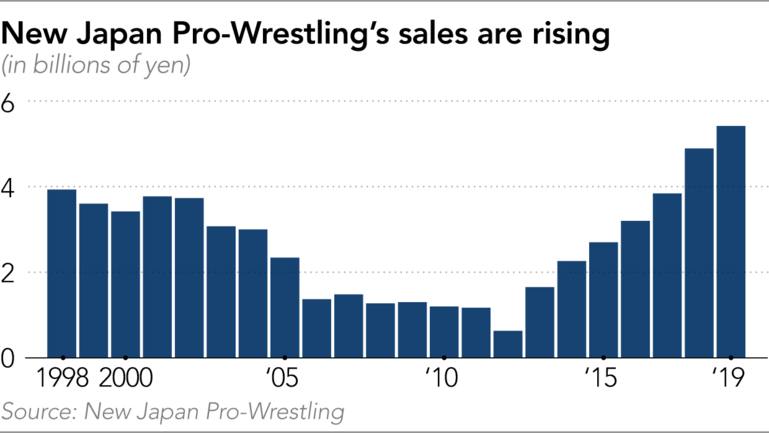 After thinking it over, Meij accepted the offer. Based on his own experience, he knew that overseas audiences could learn to love the sport, and he had plans to take Japanese pro-wrestling global.

“If you think about baseball, which is popular in Japan, it’s popular in 10 other countries at most. For soccer, it’s about half the world,” he said. “Compared to that, wrestling and fighting — they’ve existed all over the world since the Roman Empire, and the rules are clear and simple. They can be a common language everywhere.”

Meij arranged for three matches to be held in the U.S., but Japanese fans reacted negatively to the push abroad. Twitter users accused the organization of thinking little of its home market.

“I wasn’t taking this lightly, thinking, ‘Maybe we should try it out overseas,’ or just chasing profit,” Meij said. “I really think that if we don’t expand to markets other than Japan, New Japan Pro-Wrestling won’t survive.” Fortunately, hard-core fans overseas were already familiar with the Japanese pro-wrestling. Compared with World Wrestling Entertainment in the U.S., which focuses more on entertainment, New Japan Pro-Wrestling has a more competitive aspect.

An April match at Madison Square Garden in New York — sacred ground in pro-wrestling — sold all 16,000 available tickets in just 16 minutes. More than 90% of the attendees at the match were not Japanese, but they sang along with the Japanese-language entry songs as wrestlers entered the arena. For Meij, it stirred memories of watching Japanese pro-wrestling on TV 47 years earlier.

The company’s wrestlers have started performing in new places, like Australia and London. There will be 14 matches overseas in 2019, up from just five last year.

The aim is to raise the company’s brand awareness and draw in more overseas subscribers to streamed matches. Numbers are starting to show the strategy’s impact. New Japan Pro-Wrestling’s revenue for the fiscal year ended July 2019 was a record 5.4 billion yen, up more than 10% from the previous year.

Streaming subscribers, key to the strategy, stood at 100,000, a 60% increase from the previous year. About half of them are overseas subscribers.

Much like manga and anime, the colorful characters and striking stories that make up Japanese pro-wrestling are finding an eager audience around the world. That is thanks in no small part to a young Meij who fell in love with the sport nearly 50 years ago.

In Your House, plus Matt Riddle on Smackdown, Adam Cole as a babyface, and more! (112 min) –

How to Choose Acid Base Titrations Lab Report

JohnMiller83 - October 13, 2019
0
You may have a look at our Sample Lab Reports for additional information. After accomplishing previous operations, you've got to compose a theoretical portion...