Leading up to the KSI-Logan Paul fight, Matchroom Boxing head Eddie Hearn told BoxingScene.com in an interview that YouTuber showdowns were a “one-off” and that he was not looking to do celebrity matches.

As the fight got closer and the magnitude of the event got bigger, Hearn shifted his attitude toward the novice spectacle even thought the fight drew nearly three thousand fans less in Los Angeles than the first one in Manchester last year.

“It has actually [changed my stance]. We’re numbers people in this game. Everyone is. Anything that delivers is good news for everybody. What we can’t do is turn into a circus and have random people fighting each other all over the place,” Hearn told BoxingScene.com.

“It’s a one off in that respect for me in terms of headlining a card, with a world championship undercard. I don’t think you’re going to see that a lot. Will you see other YouTubers fight on undercards moving forward? Much more likely.” 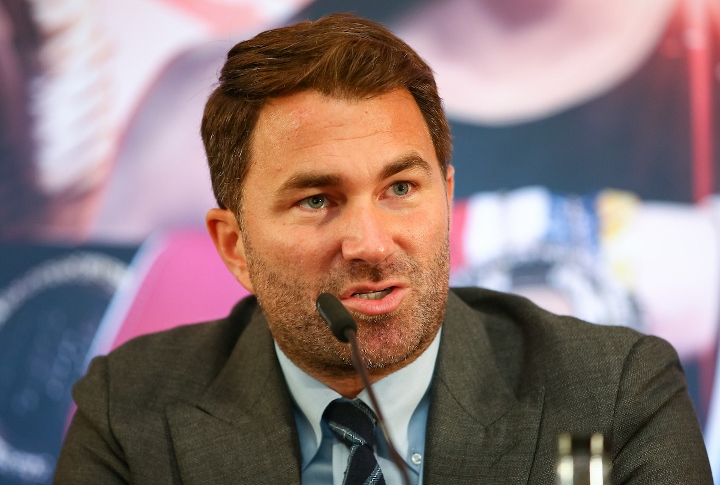 Immediately following the fight, Matchroom Boxing CEO Frank Smith said they were “very happy—smashed it” in terms of driving subscriptions for DAZN. He didn’t offer to share any specific numbers, nor did the OTT streaming device.

DAZN is reportedly set for a major live sporting events acquisition spree, per Axios. For the first time, it will create free programming to make more people aware of its product in the US, and they are raising $500 million to do so.

Along that journey, it has been gauging the appetite for similar-styled fights like KSI and Paul.

In an email survey obtained by BoxingScene.com, DAZN asked a series of questions like “imagine there was a boxing tournament that featured YouTube / celebrity personalities that ran throughout the year. How interested would you be in a boxing competition like that?” and “are they any other YouTubers or celebrities that you would like to see fight in a boxing match?”

“If it’s thrilling, if it’s exciting, you’re going to see many more of these, and it won’t just come from me,” said Hearn. “It will come from other promoters who look at the numbers and say, ‘we’ve got to do this.’ We can’t satisfy the demand of all of these celebrities and YouTubers.”

Hearn said fighters like Devin Haney and Billy Joe Saunders, who served as co-features for KSI and Paul, are fine with serving as chief support to a circus-like show.

“We saw fighter’s numbers grow digitally and socially through this event. It’s a big opportunity for them,” said Hearn. “It’s been amazing to learn about this experience and learn [KSI and Logan Paul’s] business. These guys are very smart people. Looking at the pre-buy numbers was blowing my mind. It was at the same level as an Anthony Joshua fight, or even bigger. They have earned the right to be here because they’ve built a brand and profile and they are taking it seriously.”

Manouk Akopyan is a sports journalist and member of the Boxing Writers Assn. of America since 2011. He has written for the likes of the Guardian, USA Today, Philadelphia Inquirer, Men’s Health and NFL.com and currently does TV commentary for combat sports programming that airs on Fox Sports. He can be reached on Twitter, Instagram, LinkedIn and YouTube at @ManoukAkopyan or via email at [email protected].

nomad - August 11, 2019
0
It didn't take long for former UFC fighter Cris Cyborg to find a new job. Partnering with Dunkin Donuts, you can now find the...

10 Best Restaurants In Goa To Bookmark For Your Next Holiday

5 New presents for an international wife if an older man...