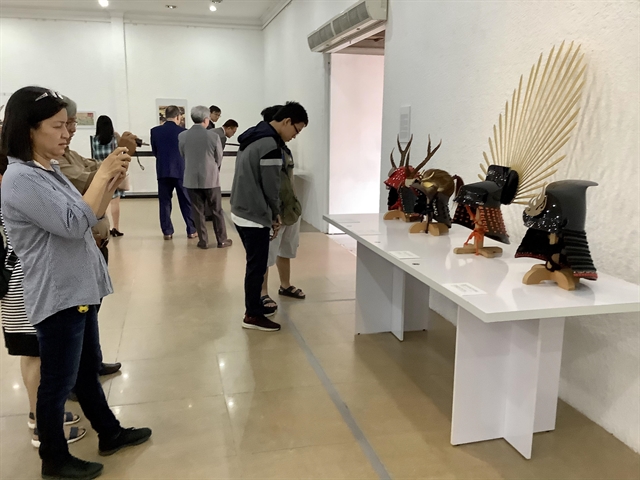 Kicker: Visitors at the Exhibition House in HCM City view helmets at the “The Spirit of Budo: The History of Japan’s Martial Arts” exhibit. — VNS Photo by Phương Mai


HCM CITY — “The Spirit of Budo: The History of Japan’s Martial Arts” exhibition has opened in HCM City.


The event is co-organised by the Japan Foundation Center for Cultural Exchange in Việt Nam and the Consulate General of Japan in HCM City.


On display include reproductions and originals of weapons such as bows and arrows, swords, suits of armor, and helmets made of bamboo, wood, lacquer, cow horn or iron.


The development and changes of Japanese martial arts from the 8th to 19th century are also depicted on panels.


The exhibition also includes displays about the organisation of bujutsu to budo in the 19th and 20th century, and how the spirit of martial arts still exists in the daily life of Japanese people today.


Clothing and implements used in nine Japanese martial arts like Akido, Kendo, Karatedo and Sumo are on display as well.


Toshiki said: “We hope that, through this exhibition, viewers will become aware of not only the history of Japanese martial arts, but also of people’s aesthetic awareness and creativity, and Japan’s social history and the Japanese way of thinking from a new angle.”


“The Spirit of Budo: The History of Japan’s Martial Arts” exhibition was first organised by the Japan Foundation in the US in 2007. Since then, it has travelled to dozens of countries in Asia, Europe and the Americas.


The exhibition runs until November 24 at the Exhibition House ò HCM City at 92 Lê Thánh Tôn Street in District 1. — VNS

Packed schedule at Blues for Food this Saturday

All Star Preps: Wrestling team announced for this year – Sports...

Sporting Lives and Times: ‘I won as part of a team...

Good Bad that is vs Debt just how to Prioritise Which...