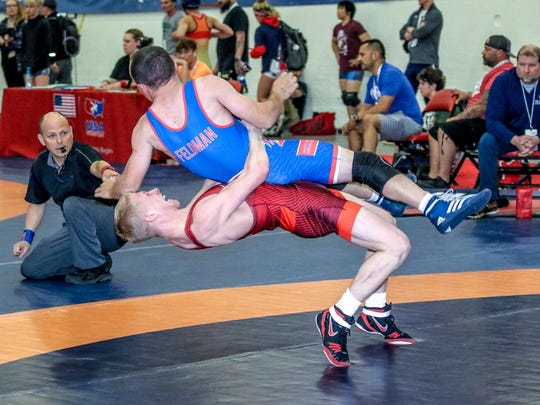 So, the day after qualifying for another United States world wrestling championships team, the 2014 Fowlerville graduate drove from Akron, Ohio to Middleville to race an evening half marathon on the trails at Yankee Springs Recreation Area.

“Early on in the race, I was telling the guys I was running with in the front pack, ‘This is my first (trail) race, I’ve never done anything like this,’” Roberts said. “One guy said the goal is just to finish, it’s not about winning.

“The whole last mile was a sprint. I finished and the guy behind me who took second was the same guy who said it’s just to finish.”

He obviously didn’t know who he was up against. Roberts mentioned that he wrestles, but didn’t get into details like he had just qualified for a United States world championship Greco-Roman team for the sixth time.

Roberts bumped up from 60 to 63 kilograms for the under-23 team trials, winning all five matches. He won the best-of-3 final against Dylan Gregerson of Utah, 4-0 and 8-0.

“I went up a weight class, just to wrestle some people I don’t usually wrestle,” Roberts said. “I didn’t have to cut any weight, which was nice. I had Outback Steakhouse the night before, which was odd for me, because usually the night before a tournament I don’t eat, because I’ve got to make weight. That was nice.

“I was definitely less tense and put less pressure on myself on that one. I was wrestling a different weight class and didn’t have to cut weight. It was kind of like a change of scenery.”

For Roberts, his victory was redemption after failing to qualify for the senior world championships for the second year in a row. He won the trials for the U.S. senior team last year, but took fourth in the Senior World Team Trials Challenge Tournament May 19 in Raleigh, N.C.

“It was just not a good tournament,” Roberts said. “I won it last year. I think I put a lot of pressure on myself. I just didn’t wrestle as well as I usually do. I was planning to go to U23s all along. I originally planned on making both teams. That didn’t work out, so I just went for the next-best thing.”

It’s the last year that Roberts, who turns 23 on July 21, will be eligible for the under-23 tournament. His focus after competing in the world championships Oct. 28-Nov. 3 in Budapest, Hungary will be on preparing for a shot at the 2020 Olympic Games.

Thank you! You’re almost signed up for

Keep an eye out for an email to confirm your newsletter registration.

“We train these four years and a whole lifetime for the Olympic Trials and the Olympic Games, so everything just leads up to that,” Roberts said. “The last Olympics in 2016, I was still a junior age-grouper, kind of learning the sport, getting that experience. Now that it’s 2019, I’ve put on some years and some weight and definitely some experience. I’m nowhere to like peaking right now. I’ve still got a ways to go. This quad and the next quad, 2020 and 2024, are the goals.”

On the side, Roberts will continue to participate in his newfound passion for trail running. Training at the U.S. Olympic Training Site at Northern Michigan University gives Roberts access to some incredible and challenging trails.

“I ran track in seventh grade,” Roberts said. “It wasn’t for me. I just started enjoying it through wrestling. It’s something that’s kind of transcending going on long runs and just finding your limits and yourself. It gives you a lot of time to think.”

Wrestling, of course, is topic at offbeat NFL media night

nomad - December 5, 2019
0
One of the first sights Robby Sidhu remembers when he came to the Fresh Start Recovery Centre was a colourful mural on the wall...

Shakur Stevenson: Socarras Has Never Faced Anyone Like Me