George Brennan got back to winning ways with a comfortable win over Luke Fash.

Altrincham’s ‘The Cereal Killer’ took on the Hull man at the full-to-capacity Village Hotel in Bury, which hosted a pre-fight VIP Q&A with ex-world champion Scott Quigg, and got the nod on referee Jamie Kirkpatrick’s card by a margin of 40 points to 36.

Debutant Dan Booth got his professional ledger off to a flyer with a first round stoppage over Karim Khan. 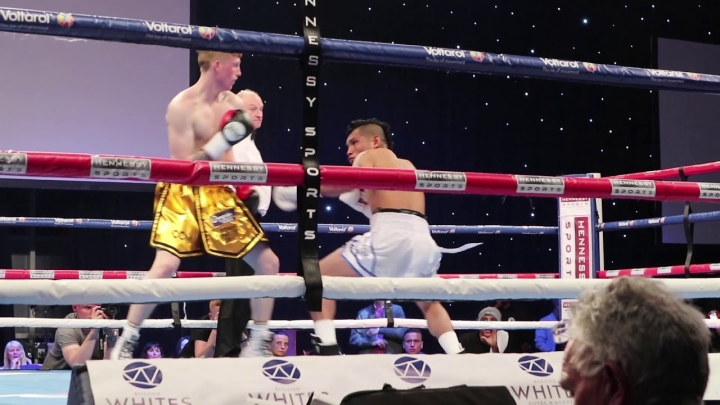 Booth, from Manchester, had a vociferous following and played up to that support as he dropped the Steel City fighter. Khan bounced straight to his feet and looked like beating referee Kirkpatrick’s count, but that was dispensed of after 2-36 following the 27-year-old falling into the ropes upon his rise.

The Mostonian, who is 22 and had a 19-month hiatus prior to the triumph, was ticked off by referee Kirkpatrick for a couple of low blows but showed what his fans have been missing as he displayed spells of flashy skill en-route to a 39-37 win after some late pressure from his counterpart.

Lee Clayton produced arguably the best boxing display of his pro campaign as he secured another win.

The Haywood man, a former Central Area title challenger, knocked down Sheffield’s Kieran Holman in the third round with a left hook to the body before third man Kirkpatrick scored it a shut-out at 40-35 at the end of four.

And Bury’s Ben Ridings kicked off the show with a routine points victory over late replacement Kevin McCauley.

Ridings was on top for the most part against the Stourbridge man and after four completed rounds, the sole arbiter Kirkpatrick handed in a tally of 40 points to 36.

Josh Buatsi and boxing pal Cheavon Clarke have wheely intense rivalry on bikes – and might turn to WRESTLING if it rains – The...

Boxing is back as Shakur Stevenson prepares for promising future

Roman Salazar plans to make it a ‘long night’ for Mario...

nomad - July 27, 2019
0
Following two losses in a row to close out 2018, bantamweight Roman Salazar was able to rebound with a unanimous decision victory over Evan...

Blair Oaks wrestling searching for way to win close ones