Kick boxing is returning to Cornfest and with more than a hint a of local flavor.

On Saturday starting at 7 p.m., the 1st Annual Sweet Corn IKF Kickboxing Championships will be held at Cornfest. Doors open at 6 p.m. and it will be held at 75 E. Hollaman St. in Camp Verde.

“Everything’s looking great,” said Golden Cobra promoter/trainer Richard Williams on Wednesday night. “So far I haven’t had no fights drop out so it looks like we got maybe 13 fights, as long as everything stays good.”

Golden Cobra and the Town of Camp Verde are putting the event on. It costs $20 for general admission, $10 for kids and $30 for ringside.

“I think the town is just as excited as we are because it’s something new,” said IKF Arizona rep Sandee Olding. “The town manager, Russ Martin’s been amazing but we all worked together and we’re working as a team and as a you work as a team it all fits into place, just like a puzzle.” 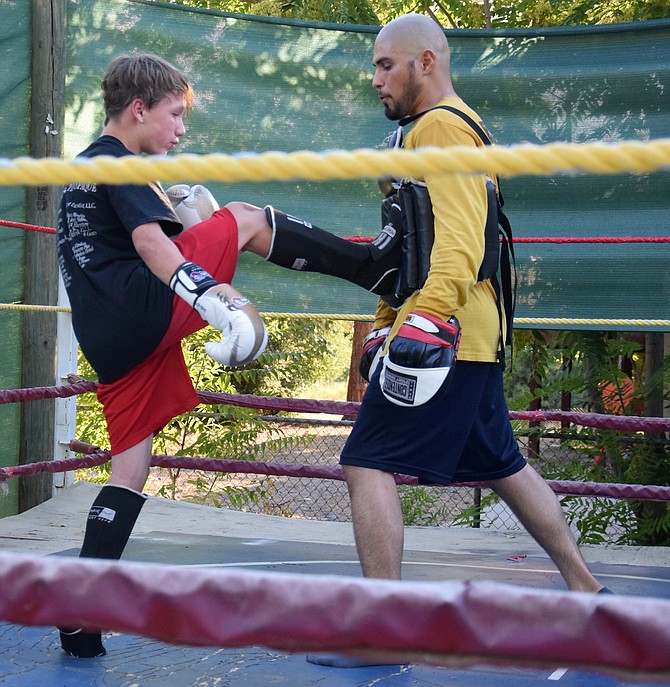 Williams said Romero’s kicks are so strong that the 29-year old fight ripped one of Williams’ biceps during training the other day.

Romero said it’s very nice to get to fight in Camp Verde.

Romero returns the to ring after joining the fight card on a couple days notice ahead of the last event Williams promoted in Cottonwood last month.

“We had to throw him in last month on a two day notice and he was still cutting weight,” Williams said. “That fight that happened there I was trying to prepare it for the Cornfest but because everyone was pulling out I had to throw my young warriors in. My fighters are loyal, the family’s loyal, Adam (Hines) stepped in with a week notice.”

Despite the short notice, Romero only lost by split decision. The fight with Ramirez will be fought under international rules.

Romero is one of the handful of fighters from Camp Verde.

Myra Guillen, from Larson’s Boxing & Fitness will make her debut in the junior middleweight.

Tanner Evans from Golden Cobra will fight in junior heavyweight.

Evans has been waking up at 6 a.m. to run for about a month. It will be the debut fight for the 13-year old.

“It makes you wake up in the morning and feel good for the day,” Evan said.

They take an about 100 pound river rock, lit on fire put on his stomach and then two guys on each side with sledge hammers breaking the rock.

“It’s going to be an amazing show and I’m proud to be a part of it,” Williams said.

“He is Going to Land Something Big”: Dustin Poirier Has a Surprise Prediction for Tony Ferguson vs Justin Gaethje

6 things to do this weekend on the Central Coast

nomad - July 27, 2019
0
Looking for something fun to do this weekend? Here are some of the events happening across the Central Coast: SATURDAY, JULY 27 Woodies at the Beach...

The Golden Contract: Live stream of featherweight and super-lightweight draw |...

International kickboxing star is killed outside a suspected cannabis factory |...