Ryoko Tamura, the legendary judoka from Japan, started practising the sport at the age of 7. She went on to win five Olympic medals, including 2 golds. Later on, when she retired, she was named the ‘best female judoka ever’ by the International Judo Federation.

Nine years after her retirement, a 16-year-old girl from Manipur in India wants to emulate Tamura and replicate her achievements. 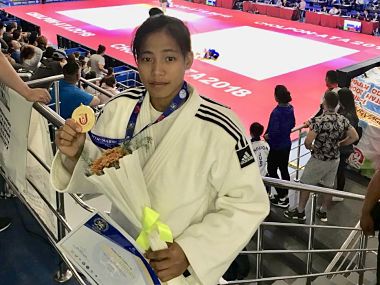 ”I look up to her (Ryoko) success and want to be like her and win medals at the Olympics for my country,” said Tababi Devi.

But who is she?

Tababi is the country’s first judo athlete to win a medal at an Olympic level. She clinched the silver medal at the Youth Olympics 2018 in Buenos Aires last year. Tababi’s big achievement last year may have not created a great stir in Indian sporting circles and media, but a short conversation with her gives enough assurance that she could become a definite star in the future.

Coming from a humble background, Tababi had to fight a lot of hassles to reach so far and be noticed. Ironically, her introduction to the sport also happened after getting into a fight with a neighbour. Getting into a fight, as she recalled, was a usual happening for her.

She told Firstpost, ”In my village, I used to get into lots of fights, and one of neighbours with whom I would fight quite a lot was a judo player. I saw her and thought that I should also take up the sport. Initially, I started training on my own and subsequently, told my parents that I wanted to train seriously. That’s how the journey began and I started doing well and people took notice. Then, I was scouted into the Inspire Institute of Sports (IIS) Judo program in 2017 and since then, my career has truly taken off.”

At such a tender age, even by sporting standards, Tababi sees nothing coming between her and judo. Not even going to school, playing a sport for fun or taking up a hobby to just swing her mood in a different direction, even just for the sake of breaking the monotony in life. She said that sports is what she loved from the beginning and there is nothing that excites her more than that.

”I have loved sports and games since as long as I can remember. If I wasn’t playing judo, I would probably have been playing some other sport, so I can’t really think of anything that I miss doing at the moment. Sports has played a very important role in my life and has helped me make a name for myself. So, I am ready to focus only on judo and not worry about missing out on anything else,” she explained.

Tababi is in the final year of fighting as a cadet. Her current focus is on winning the Asian Cadet Championships and the World Championships later this year but her eyes are set on the bigger goal: 2024 Games in Paris.

”For me, at the moment, I want to stick to the more near-term targets that I have set with my coach, Mamuka Kizilashvili at the Inspire Institute of Sport. This year, my focus in on excelling at the Asian Cadet Championships and the World Championships since this is my last year as a cadet. For that, I might be going for a training camp to Japan with some fellow IIS judoka which will be a huge exposure. I might also participate in the Junior World Championship to test myself against more senior and accomplished judokas.”

”The 2024 Olympics at Paris is what my long-term goal is. I will have lots of opportunities to represent India during that period and I am focused to do my best and bring India a medal at the Paris Games,” she added.

The reason the 16-year-old stood out from the rest and clinched the first judo medal for India is her quick feet movement. However, Tababi realises that there are many areas that she needs to work on, one of them is fitness.

“I am just trying to put in my hours of training to help me become stronger and fitter on the mat. I am working on improving my favourite techniques with lots of practice on the mat with my coaches, but at the same time, I am also lucky to be working with the full team of expert physios and strength and conditioning experts at IIS to help me stay fit and injury-free,” the teenager said.

At the Youth Olympics last year, Tababi wanted gold but now she has no regrets. She looks back at the event with pride of having done something credible for herself and historical for the country. ‘

‘I felt very proud that I represented India at such a big stage and won a medal for my country. I had competed and won at the Asian level before, but I had no idea about what to expect competing at a global level with some of the best athletes from around the world participating,” she said.

“My aim was to win the gold, but I still took back an amazing learning experience from Argentina, where I had some great results on the way to the finals. The fact that I was given the honour of donating my judogi (judo jacket) to the Olympic Museum after my performance was just the icing on the cake,” she concluded.

A Russian wrestler turned Filipino? Looking at naturalization as a winning...

nomad - September 2, 2019
0
Sen. Manny Pacquiao, a world boxing legend, is pushing for the naturalization of a Russian wrestler....

The Art of Self-Defense Trailer: Jesse Eisenberg Is Karate-Obsessed

Deshhit: Kashmir’s Mehreen and Rabia to participate in Karate championship in...