IU head coach Angel Escobedo started the night with a wide grin, waving his arms up in the air as he pleaded for the Wilkinson Hall crowd to respond. He ended the night watching IU drop its fourth straight conference loss 23-9 to No. 9 Purdue.

To open the competitions, the second-year head coach had just seen 149-pound sophomore Graham Rooks put his bout away, finishing a 9-3 route over No.15 Griffin Parriott.

After turning a 3-3 tie into a convincing win, Rooks popped up and turned to the crowd when the buzzer sounded. He stretched his crimson singlet, presenting it for Wilkinson Hall to see. One word could be read clearly: Indiana.

“I was just excited, coming out and beating a ranked opponent,” Rooks said. “I just wanted to get the crowd into it and the team into it. Purdue wanted to come in and smack us around, and I wanted to prove to them that we can keep up with them.”

But after Rooks, it was more bitter defeats in tight matches as the theme of the season continued. On Saturday, it was a mere 21-15 loss. And against Illinois on Jan. 12, IU had six wrestlers lose by four or less.

Next, 157-pound IU senior Fernando Silva was tasked with facing No. 6 Kendall Coleman. A back-and-forth battle allowed Silva to escape with 25 seconds remaining to send the match to sudden victory. Coleman eventually came out on top with a takedown, ending the score at 8-6.

Junior Dylan Hoey was inserted into the IU lineup at 165 pounds for his first conference competition of the season. Hoey was unable to finish the takedown that would have tied the score, leading to a 6-4 defeat.

“We were in a position to win three more matches tonight,” Escobedo said. “It could have been a whole different dual meet. But I’m proud of my guys and their effort.”

The premier matchup of the night was between IU’s No. 25 junior Jake Covaciu and Purdue’s No. 4 Dylan Lydy.

Again, it was the same story.

Covaciu and Lydy danced around, without many points being tallied. Regulation ended with a 1-1 tie, and extra time was needed.

The noise was quickly drained out of the building yet again when Lydy took down Covaciu and extended the Purdue advantage.

The lead eventually swelled to 20-3, until 125-pound junior Liam Cronin upset No. 7 Devin Schroder 3-1. Cronin’s first conference triumph of the season prompted him to launch T-shirts into the crowd.

Then freshman Cayden Rooks earned a win, his second in three days. IU gained some momentum, but the outcome was already sealed.

Escobedo is still waiting on the signature win he has been talking about over the last two weeks. But his squad’s inability to seize opportunities in close matches has set IU back.

Cronin is optimistic IU will get that prized mark in the win column soon.

“You can see tonight that we had some big wins, and there are guys all throughout the lineup waiting to break through,” Cronin said. “It’s just a matter of time.”

The Hoosiers dropped their third straight game on the first of a two-game road trip.

The Hoosiers went 13-3 in doubles at the IU Winter Invitational. 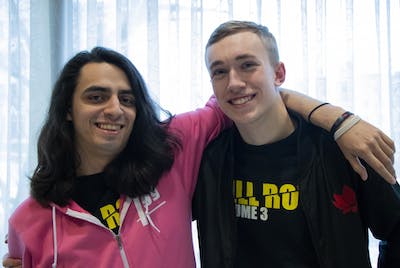 The event marks one of the last for organizers Craig Sullivan and Austin Fletcher.

The Rock gets his name from his wrestler dad, who now...

ONE Championship 2019 Edge of Greatness Results and Highlights | Bleacher...

But, Our Degree Attempt Best To Give You The Affordable For...