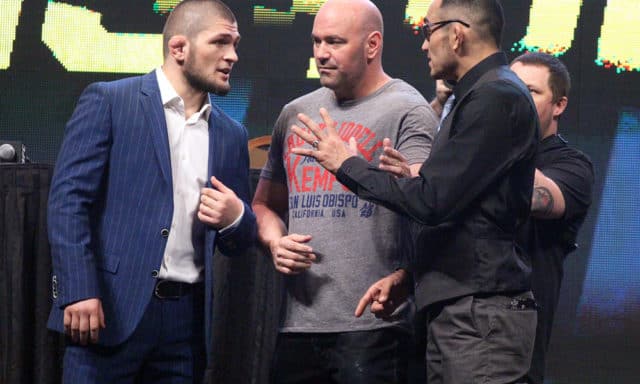 American Kickboxing Academy head coach Javier Mendez made an interesting assessment of who he felt Khabib Nurmagomedov’s toughest opponents would be at lightweight.

Nurmagomedov is slated to return for a title unification fight with Dustin Poirier at UFC 242 on September 7 in Abu Dhabi. His last fight, of course, was a successful title defense against Conor McGregor at UFC 229.

Many have since wanted him to face Tony Ferguson in what is a dream fight in the lightweight division. However, with Nurmagomedov suspended and Ferguson dealing with personal problems at the time, Poirier would face and defeat featherweight champion Max Holloway for the interim title last month.

Despite missing out on the chance to face Nurmagomedov, it’s entirely possible Holloway makes a permanent move to lightweight in the future.

“The Eagle” rematching McGregor is also a possibility, while one could imagine a win for Ferguson at UFC 238 will finally guarantee him the next shot at the title.

Regardless, who does Mendez rate as the toughest opponent?

“Talking about four potential rivals for Khabib I can give my assessment from the less dangerous to the most dangerous,” Mendez told SportsDaily.ru. “Max Holloway to be the easiest for Khabib. Max has good boxing but it lacks the power to the lightweight division. Next on the list is Dustin Poirier. He’s got stamina and versatility.

“Tony Ferguson is my second choice. His elbows are very dangerous. And finally number one contender for me is still Conor. His boxing is special, that’s his chance.”

It would be interesting to know if that’s how Mendez really felt.

For many in the MMA world, Ferguson, who is on a 11-fight win streak, is considered to be the toughest challenge for Nurmagomedov.

McGregor, meanwhile, didn’t look impressive even with his striking against Nurmagomedov last fall. However, any fight with the Irishman means big money, and it’s possible that’s why Mendez is rating him so highly.

Regardless, any combination of those four fights with Nurmagomedov is a treat for fight fans. Hopefully, we get to see them all starting with Poirier.

Break a Sweat and Get Your Cardio in With These 5...

Harry Styles of One Direction Caught Gambling Once Again in Perth...

Which selection of alloys are definitely the many sensitive