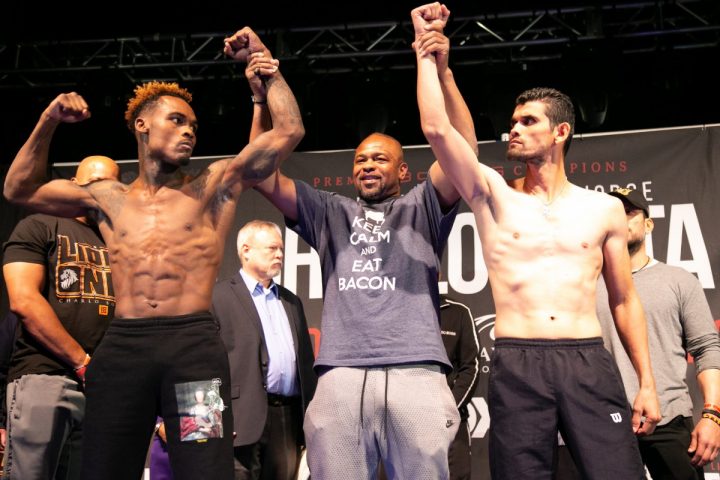 By Jeff Aranow: Jermell Charlo weighed in at 154.6 pounds for his scheduled 12 round match against second tier fighter Jorge Cota this Sunday night on Fox and Fox Deportes from the Mandalay Bay Resort & Casino, in Las Vegas, Nevada. Charlo vs. Cota is the main event. The television portion of the card begins at 8:00 p.m. ET/ 5:00 p.m. PT.

Cota (28-3, 25 KOs) weighed in at 154.2 pounds, and looked slightly emaciated. He’s looked that way all week long, which is a sign that he struggled to make weight.

Former WBC junior middleweight champion Charlo (31-1, 15 KOs) was originally supposed to be facing WBC 154-pound champion Tony Harrison in a rematch, but the Detroit native suffered an right ankle injury while training earlier this month, and had to pull out of the fight. Cota was brought in as the replacement opponent for Charlo to fight in order to keep the fight date.

Cota, 31, is coming off of a controversial 10 round split decision to Jeison Rosario last April in Carson, California. The loss for Cota interrupted a three-fight winning streak he had going for him. Cota lost to Erickson Lubin by a fourth round knockout in March 2017. Earlier in Cota’s career, he lost to Marco Antonio Rubio by seventh round knockout in June 2012.

Charlo, 29, is still bent out of shape from having lost to Harrison by a 12 round unanimous decision last December in Brooklyn, New York. Harrison out-boxed Charlo, and looked like the better fighter. However, the Premier Boxing Champions commentators had Charlo winning. It’s unclear whether they were pulling for Charlo because he was the A-side, and the house fighter or what. Whatever the case, the judges didn’t agree.

Charlo: Cota is in my way

“I’m ready to fight. I’ve been ready to fight since they robbed me of my title. I want my belt back and I want every title in this division. This is my moment, and Cota is in my way,” said Charlo. “I’m going to press my action and do anything I have to do to win this fight. If he can hang in there and stand the power and punch output, he can go 12 rounds.”

No one robbed Charlo of his title. He lost it fair and square to Harrison last December. Charlo was swinging for the fences the entire fight, and this enabled Harrison to out-box him all night long. Had Charlo boxed instead of slugged, he might have won the fight.

The winner of the Rigondeaux vs. Ceja fight will be the mandatory for WBC champion Rey Vargas.

“I’m ready to continue my legacy as a pound-for-pound great and I feel I have the opportunity here. I’m going to be the King of 122-pounds. No one wants to see me in the ring,” said Rigondeaux.

This will be a tough fight for the 38-year-old two-time Olympic gold medalist Rigondeaux. Ceja, 26, punches hard, and he’s a lot younger than Rigondeaux. However, Ceja is coming off of a fourth round knockout loss to Franklin Manzanilla last year in May 2018, and he’s been out of the ring for 13 months now. It’s bad news that Ceja has been inactive for so long before fighting such a formidable opponent in Rigondeaux.

Three years ago, Ceja was knocked out in the first round by Hugo Ruiz in February 2016. This is the same Ruiz that WBA Super World super featherweight champion Gervonta ‘Tank’ Davis stopped in the first round last February. Ceja lost a 12 round majority decision to Jamie McDonnell in May 2013.

Other weights on the card:

writes your essay for you

International Females Day What is needed to People and Exactly why...

nomad - September 24, 2019
0
International Females Day What is needed to People and Exactly why We Enjoy Today is a good day. It's March fifth, International...

Luke Rockhold looking to go ‘straight through’ to Jon Jones with...