John Howard discusses the PFL welterweight playoffs, which goes down Friday night at PFL 7. The event will take place at the Mandalay Bay Events Center in Las Vegas. Howard will face David Michaud in the opening round of postseason action and, if victorious, he will move on to face the winner of the Glaico Franca and Andre Fialho matchup later on at the event.

“Doomsday” discusses his big knockout win over Ray Cooper III and how he has made a resurgence among the MMA community since then, the viral videos that stemmed from that knockout, why he owes a debt of gratitude to Cooper III, his ability to shock people at 36 years of age, how he likes the matchup with Michaud, the preparation for fighting multiple times in a night, what he learned from the bizarre ending to his middleweight playoff fight with Louis Taylor during last year’s PFL season, if he has a preference in facing Franca or Fialho later in the night, what winning the $1 million will mean to him and his family and much more.

Howard also discusses finding love for the sport of MMA again following his last fight — a feeling he hasn’t had in quite some time.

“I just need to tell you the truth, I found love again,” Howard told MyMMANews.com with a big smile on his face. “It’s like finding that girl… like, you get divorced, you say ‘I don’t believe in love no more’, and then you meet that special someone. That’s that happened to me. I fell back in love with MMA and I am just so excited to fight. That ‘Doomsday’, that kid that you saw in the UFC that was knocking people out, he’s back! He’s back for sure and I’m just so happy to have that found love again, that passion, that drive. The love is so strong it’s not even about winning again. It’s about f****n fighting again! It’s about fighting, bro. Win or lose, that is God’s will. My job is to fight and I’m back in love. I can’t wait [for Thursday].”

Check out the conversation with John Howard ahead of Friday’s kickoff of the PFL welterweight playoffs in the video above. 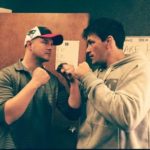 Mike Heck is the Founder of the SFLC Podcast
This is an MMA Podcast for Fans by Fans. We bring you conversations with the biggest names in the world from the sport of Mixed Martial Arts!

TOM’s High School Wrestler of the Week – Powered by Adidas...

Headliner Brandon Vera all revved up for ONE: Century