After an impressive five-fight foray in the United States that resulted in a promotional pact with Matchroom Boxing, WBC junior bantamweight champion Juan Francisco Estrada returned home south of the border to Mexico on Saturday as the headlining attraction against Dewayne Beamon in front of a sellout crowd of 12,000 fans.

Estrada (40-3, 27 KOs) dropped the American Beamon (16-2-1, 11 KOs) twice in the second round en route to scoring a ninth round TKO win at the Centro de Usos Multiples arena in Hermosillo, Mexico. The main event was part of Matchroom Boxing’s showcase on DAZN and Sky Sports.

The fight got off to a fast start in the second round when Estrada checked Beamon with a left hook for a knockdown. Seconds later, Estrada, a former WBO and WBA flyweight titlist, got Beamon again with a body shot, and he crumbled down for a second time. The pair of knockdowns, however, didn’t appear to hurt Beamon, who closed the stanza with a sharp left hook before the sound of the bell. 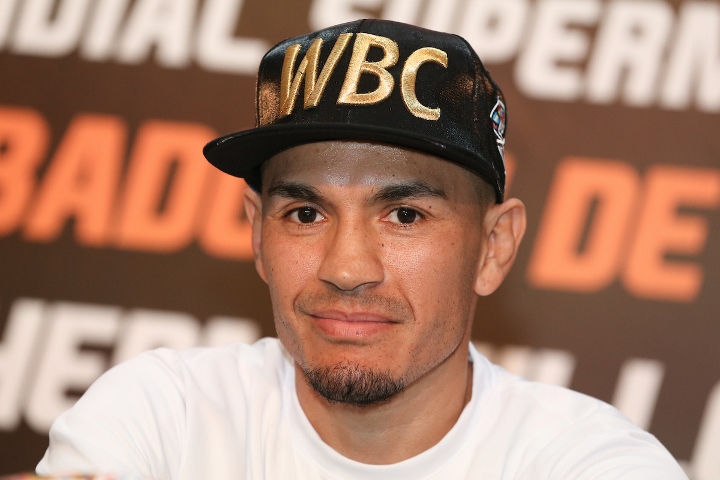 Beamon was hurt and on the ropes again in the third, as a series of compact Estrada combinations pushed him back. One Estrada punch in particular had Beamon going head-first through the ropes, but he didn’t fall.

Everything seemed to be landing and working for Estrada, as Beamon, who only turned pro at age 33, never found an answer for his masterful opponent. Beamon showed some signs of life in the fourth and fifth rounds, but never to the point where Estrada was in danger. Estrada even taunted Beamon for a quick moment when he put his hands on the ropes while Beamon attacked.

At the end of the sixth round, a beaming Beamon, proud of his output, returned the favor in gamesmanship by roaring in Estrada’s face. It was his best and perhaps only showing of the fight to that point, and the display of confidence was appropriate.

Beamon returned in the seventh round and was promptly outboxed and rocked by Estrada, who, if it weren’t for the sound of the bell at the end, would’ve likely scored another knockdown. Estrada connected with a right that sent Beamon stumbling across the ring. It was shortly followed with a vicious uppercut.

In the eighth round, Beamon’s left eye was bloodied and swollen as Estrada marched forward and dictated the tempo, landing cleanly with everything at will. The end was nearing.

Estrada finished his onslaught 53 seconds into the ninth for the decisive technical knockout victory.

The 115-pound Estrada continues his climb toward the top of boxing’s pound-for-pound ranks. He was returning to the ring and defending his title for the first time since a resounding April win against Srisaket Sor Rungvisai. Estrada avenged his 2018 loss against the Thai fighter.

Following his win and first title defence against Beamon, Estrada now puts himself in position to unify the division against the likes of champions Kazuto Ioka (WBO), Jerwin Ancajas (IBF) and Khalid Yafai (WBA).

Manouk Akopyan has been a member of the Boxing Writers Assn. of America since 2011 and has written for the Los Angeles Times, USA Today, the Guardian and Philadelphia Inquirer. He can be reached on Twitter, Instagram, LinkedIn and YouTube at @ManoukAkopyan or via email at [email protected].

nomad - July 27, 2019
0
-Originally aired May 6, 1989. -Your hosts are Jim Ross and Michael P.S. Hayes. But Hayes clarifies that he’s actually still suspended from commentary because...

Saenchai teaches new Muay Thai generation to be him (video)

Jorge Linares Bounces Back With Wide Decision Win in Tokyo

Amateur boxer stretchered out of ring after brutal KO at AIBA...