The team was made up of 12 athletes and consisted mostly of members from five to six years.

The club secured all top three places in the competitions, which, according to the club’s head coach Shane Culleton, was “our most successful event to date.’’ 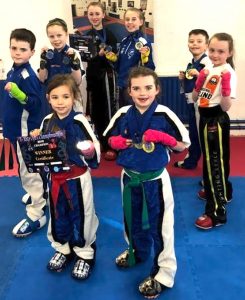 Some of the young members of the Laois Martial Arts Club who travelled to Wexford recently to take part in a competition.

Amy was followed closely by her brother Edward (8), who is a current Irish national champion. His bout was key preparation for him as he travels to compete in the Hungarian open later this month. Edward secured a gold and silver medal.

Seasoned fighter and kickboxing fanatic Ciara McPartlan had a great event, winning her light contact section and getting a well-earned silver in point fighting. Shannon Conlon was next to win gold and silver medals. Next to compete was double national kickboxing champion Caitlin Knight, who is also preparing for the Hungarian open and the European championships in August. Caitlin had a great day securing gold and silver medals in her age category.

Amelia Reinhardt competed in the U13 light contact and pointfighting sections securing a gold and a bronze medal in what is always a challenging category.

With only three months of training under his belt and competing in his first-ever competition, Silviu Junca won a silver medal.

Following the members’ success, head coach Mr Culleton said: The club and the fight team is growing all the time. The club continues to grow and is becoming the biggest kickboxing club in Laois, which is gaining huge recognition all over Ireland for the members’ continued efforts.”

nomad - November 21, 2019
0
It finally happened, after several years it looks like the UFC is trying to muscle us out of the bad fight watching...

Greg Yuna Is the New York City Jeweler You Should Know

Nong-O Puts On A Clinic