Longtime gymnastic coaches Joe and Missy Cronin have just relaunched their love of the activity in the form of the recently opened Gymnastics Sports Center in Wichita Falls.

The Cronins have deep roots in the community with nearly 30 years on the gymnastics scene, but it never seems to get old for them. 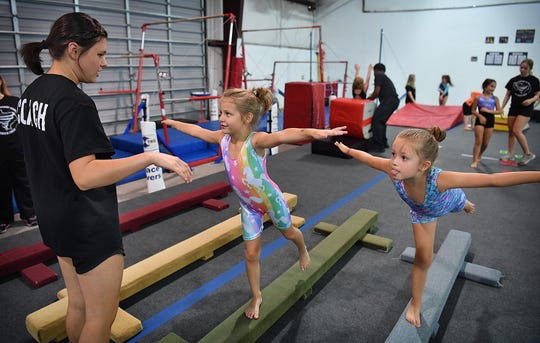 ‘We started this to not just teach gymnastics to kids but to teach them discipline, self-confidence and body awareness, all in a fun atmosphere,” Missy said Monday afternoon.

Behind her, tots as young as 3 and youth up into their teens carried out Missy’s mission in the 7,500 square foot gym.

The more advanced students flipped and tumbled across the padded floor perhaps with Joe or another coach as a spotter. The tinier ones stepped down a “balance bar” just a few inches off the ground.

In general, they appeared to be enjoying themselves while developing their skills. Amy Bailey, 13, took a few minutes to explain what she gets out of class at the Gymnastics Sports Center.

“I like the thrill, and I like the energy everyone has,” Bailey, a McNiel Middle School student, said. “I love how they push you, and they make you feel amazing.”

Bailey returned to the floor while several parents watched their kids try their hand at various moves and equipment with coaches there to lend a hand. 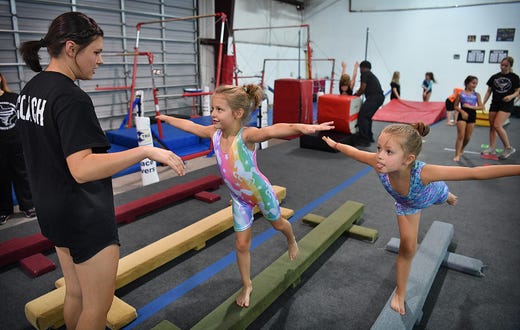 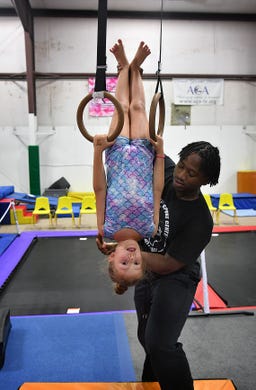 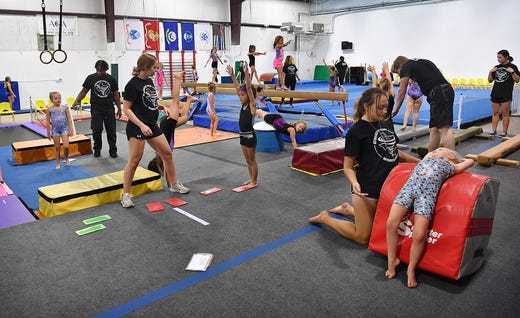 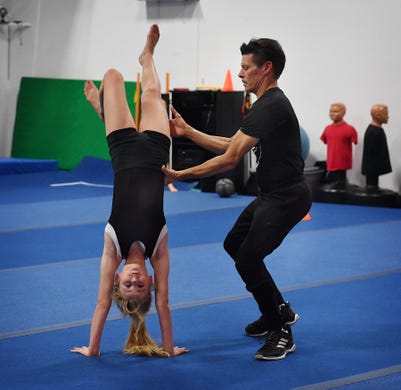 “We came here in 1990 specifically to open up a gymnastics sports center,” Joe, a Marine veteran, said. “So we did that for 24 years.”

Local YMCA officials persuaded he and Missy to run a program there for five years, he said. He missed running his own small business though

So they decided to go back out on their own and reopened about a month ago at 5828 Ashleyanne Circle with head coach Arron Littleton on the team.

“We take tremendous pride in developing quality gymnasts and quality people,” Littleton, a Midwestern State University graduate, said. “It’s all about the kids. That’s why we do this.”

The center offers classes in the evenings Monday through Thursday.

GymKata is Joe’s own invention, according  to gymnasticssportscenter.com.

For boys only 6 and up, it combines martial arts and gymnastics with an emphasis on self-discipline, and body and spatial awareness.

For both boys and girls, Parkour involves free-running over various obstacles and is for the “budding super hero,” according to the website.

In addition, Storm, GSC’s competitive team, participates in American Gymnastics Association events, according to the website.

Weekend events include hosting celebrations such as birthday parties, parents’ nights out and expos, according to the website.

Joe is originally from the Metroplex, and Missy is from Abilene where she spent a stint in Cooper High School as the mascot, Coop the Cougar.

She was a high school gymnastics all American in 1980 and 1981 and competed for Oklahoma State University, Missy said.

The two of them met at Texas A&M University where Missy said Joe stood out to her. They have two daughters, Madeline and Caroline.

Missy has a bachelor’s in physical education from A&M, according to the website.

Her husband earned a bachelor’s in sociology from A&M and a master’s in criminal justice management from Sam Houston State.

He works as a special education aide for the Wichita Falls ISD, according to the website.

Trish Choate, enterprise watchdog reporter for the Times Record News, covers education, courts, breaking news, politics and more. She loves getting news tips. If you have a good one, contact Trish at tchoate@gannett.com. Her Twitter handle is @Trishapedia.