Resorts World Catskills Casino Resort, New York’s newest and closest integrated casino resort to Manhattan, announced today that, in collaboration with Star Boxing, is bringing boxing back to the region with the Catskills Clash. The card, which includes three undefeated names fighting for titles in the American Boxing Organization, will take place on Friday, June 28 in the RW Epicenter. These up-and-coming boxers join the ranks of many boxing legends who got their start in the Catskills.

Dylan “The Real Deal” Moran – Irish Welterweight Sensation
Born in Waterford, Ireland, the 24-year-old has successfully won bouts in the UK, Ireland and Mexico, with plans to lay roots in the United States. Moran earned his nickname by rising through the ranks in Irish amateur boxing, winning 6-county titles as well as, 6 provisional and national titles. As a true combative, Moran also earned 7 national titles, 1 European Title, and 3 World Titles as a kickboxer.

Richie “Popeye the Sailor Man” Rivera – Undefeated Power Puncher
Undefeated Cruiserweight Richard “Popeye The Sailor Man” Rivera is arguably the most popular boxer and hardest hitter in New England. The 28-year-old has almost single handedly resurrected an otherwise dormant boxing scene of late in the Hartford market, which dates back a full century.

Considering the region’s undeniable tie to entertainment,countless boxing greats, including Rocky Marciano and Muhammad Ali, spent decades visiting Sullivan County to train for upcoming championship fights and faced-off against the best, making the recent addition of the Catskills Clash to the RW Epicenter line-up a natural fit.

“Boxing champions made a name for themselves in the Catskills years ago, and we look forward to bringing that same excitement back to the area”, said Kevin Kline, Chief Operating Officer and General Manager of Resorts World Catskills.  “We have established Resorts World Catskills Casino Resort and the RW Epicenter as a premier destination for live entertainment in the region, and we look forward to adding sporting events, including boxing, to our list of offerings”.

In addition to the casino resort’s luxury hospitality, distinctive dining and Las Vegas style gaming, the Epicenter has already hosted the best in entertainment with the likes of legendary comedians Jerry Seinfeld, Kevin James and Sebastian Maniscalco and musicians Clint Black, Paul Anka and Brett Michaels. With a strong line-up of local and nationally recognized acts, Resorts World Catskills Casino Resort is helping to restore the Catskills as a premier getaway and true destination. 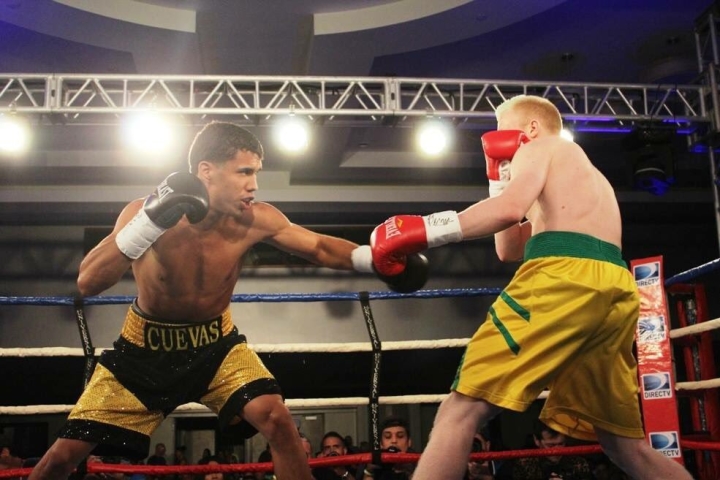 A hard-punching prospect on the rise, 24-year-old Cuevas was last seen in May scoring a wide unanimous decision over well-respected Ghanaian veteran Albert Mensah at Seminole Hard Rock Hollywood.

“I’m prepared to defend my title,” said Cuevas. “This is my first time headlining on a national stage, and I want to show all my fans that I’m worthy of a world title opportunity after this fight.”

“I want to thank All Star Boxing for giving me the opportunity to come to the U.S. and showcase my talent,” said Beltran. “I will be victorious come July 12. I look forward to fighting on the Telemundo network for years to come.”

“This will be another great show at this fantastic venue,” said Henry Rivalta, Director of Boxing Operations for The Heavyweight Factory. “Derrieck Cuevas is becoming a player at 147 lbs. and that means taking on tough opponents like Beltran from Mexico. The winner of this fight will almost certainly gain a world ranking and be closing in on a title shot. It’s going to be a terrific match-up between two fighters with their futures on the line.”

Rawlings, who has recently signed with MMA promotion Bellator, has been sparring Adams in preparation for her World title tilt, and is confident the Brisbane-boxer has the beating of the reigning 122 lbs champion.

“April is looking great,” she says. “She’s had a great camp and really levelled up in training these past weeks. I have no doubt she’ll bring home the belt!”

Having fought at the highest level, Rawlings is no stranger to facing the best and has offered Adams the following advise ahead of her biggest career test.

“I think the key to performing on the World stage is keeping a cool head, having confidence in your skills and calm in your mind,” says the 30 year-old mixed martial artist, who has not ruled out a future crossover into professional boxing.

“Professional boxing is definitely on my bucket list. I’ve fallen in love with the sport since crossing over to Bare Knuckle Boxing so it’s definitely something I’d love to test myself in.”

But for now, Rawlings focus remains on MMA and her upcoming Bellator debut. “I’m really itching to get in the Bellator cage so I’m pushing to get on their October card,” she says.

Knock out those extra calories with kickboxing!

nomad - September 7, 2019
0
One of the world’s top martial artists was in Port Alberni in August to spread the...

PCO Talks About The “Most Successful Year” of His Wrestling Career...

Eduard Folayang and Eddie Alvarez face off at ONE: Dawn of...

ONE Masters of Fate highlights: Joshua Pacio defends the belt!