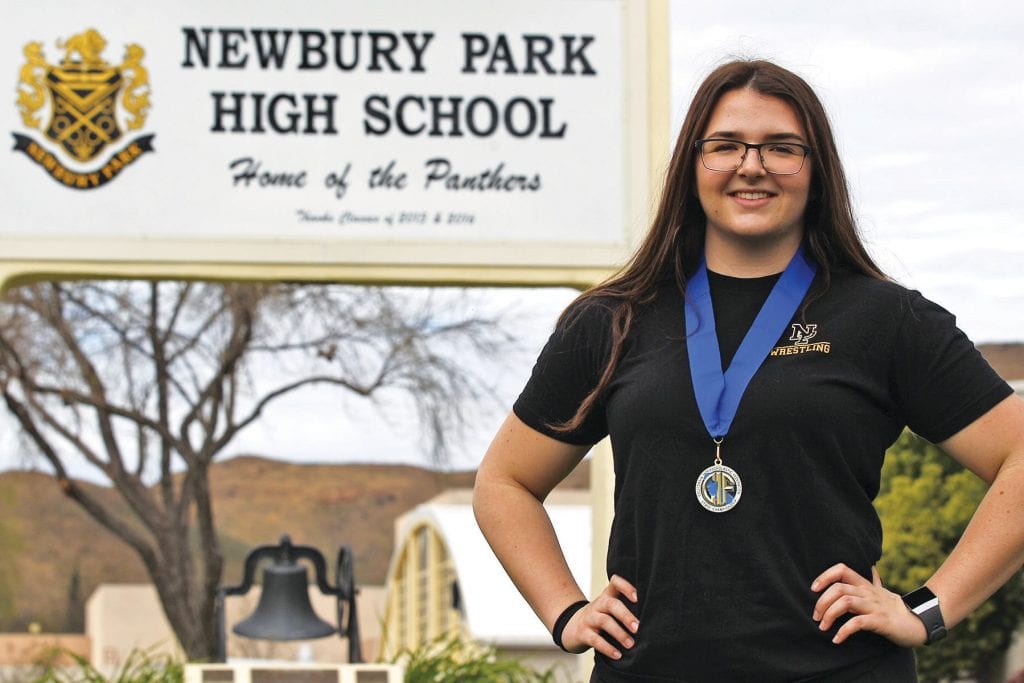 AGE OF GOLD—Julia Richey, a Newbury Park High junior, took first place in the heavyweight division of the CIF State Girls Wrestling Championships on Feb. 29 in Bakersfield. Richey is also a standout thrower for the Panthers’ track and field team. RICHARD GILLARD/Acorn Newspapers

Julia Richey’s memories on the mat are a blur.

After earning a pin in the second period of the CIF State Girls Wrestling Championship final on Feb. 29, the Newbury Park High junior recalled wiping away tears before having her hand raised at the center of the mat in Mechanics Bank Arena in Bakersfield.

Richey, Newbury Park’s first state champ since Keith Harvey took home gold in 1985, rushed to hug her coaches before lying on the ground in tears and disbelief. She quickly hopped up and ran into the crowd looking to continue the celebration with her father, Michael.

There was only one problem: Richey wasn’t wearing her glasses.

“I can’t see anything without my glasses,” Richey said with a laugh. “I was just running around the stadium trying to find my dad.” 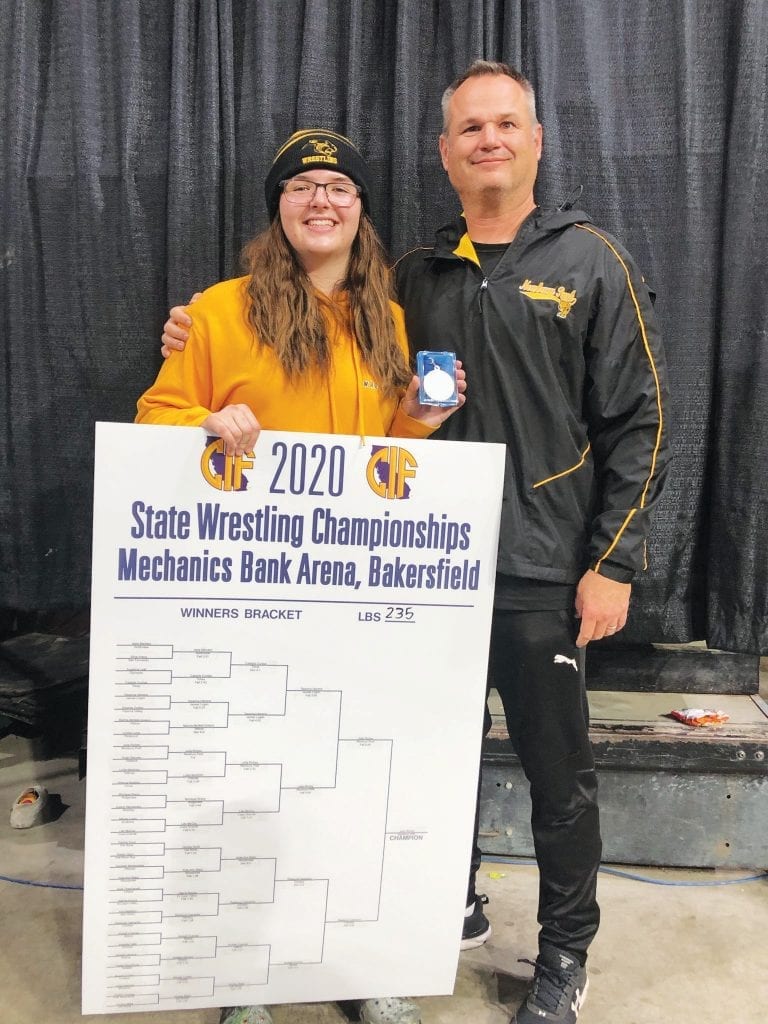 PROUD PAPA—Newbury Park’s Julia Richey shares the joy of victory at the state wrestling meet with her father, Michael. Courtesy of Julia Richey

She squinted and sprinted until she finally hugged her father.

Richey said her blurry reality didn’t really settle in until she returned home to Newbury Park.

Twitter exploded with videos and photos of the Heavyweight Queen of Cali. A local celebrity by the time she stepped back on campus March 2, Richey was bombarded with praise from classmates and teachers.

“I couldn’t even count the number of people that congratulated me before first period,” she said, looking down at the gold medal she clutched throughout an interview earlier this month. “It’s definitely hit me that I’m the best in the state.”

It’s been a meteoric rise for Richey, who joined the wrestling team as a freshman so she could have access to the weight room before track and field season.

A shot put thrower since she was 9 years old, Richey was profiled in 2015 by Acorn sports editor Eliav Appelbaum for her record-breaking feats on the Newbury Park Track Club. 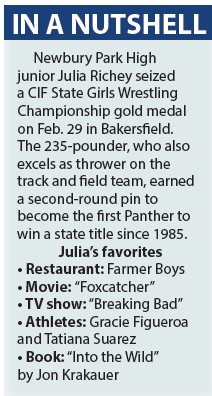 Ryan Hurley, Newbury Park’s throws coach, said he remembers reading that story in the Thousand Oaks Acorn. He knew she’d be a special thrower, but he had no idea she’d excel to such heights on the wrestling mat.

The coach described Richey as a hardworking gym rat.

“She’s usually complaining that we’re not in (the weight room) enough, or asking to come in the morning with the football guys,” Hurley said of Richey, who reached the CIF-Southern Section Masters track and field meet as a sophomore, narrowly missing a state berth by one place. “She always wants to get better.”

Richey competed in one track meet this spring before the season was canceled due to concerns about the coronavirus: She took home shot put gold at the Don Green Invitational on March 7 in Moorpark, after only four days of training.

As a freshman wrestler, Richey hardly grappled against girls. She recalled facing only one girl, against Calabasas during a team dual.

Fourth-year head coach Chris Kilbane, a Newbury Park grad who won individual CIF-SS championships in 1988 and 1989, admitted that he and his staff didn’t know much about the girls’ wrestling scene during Richey’s rookie year.

“Back when we wrestled, we didn’t have girls on the team,” Kilbane said. “We didn’t think to look for girls’ tournaments. As we got more and more informed about girls’ wrestling, we looked for more tournaments.”

The coach entered Richey into girls’ tournaments as a sophomore. Last winter, she reached her first CIF State tournament, where she finished 2-2.

After attending a pair of wrestling camps in the summer, Richey started earning the top seed at girls’ tournaments this winter.

Richey credits her success on the mat to the countless hours of work she put in with Chris DePalma, a Panther assistant coach who owns Country Harvest Restaurant and Bushido Martial Arts, and her training partner and boyfriend Michael Boudreau, who won a Marmonte League title at 220 pounds this season.

Her mother, Linda, watched the stream from home with Richey’s younger siblings, Victoria, a Newbury Park freshman thrower, and Jacob, a 14-year-old middle schooler who competes in volleyball, basketball, soccer and track and field.

Hurley said he streamed the state wrestling finale from home.

“I made a day of it,” he said. “I turned my TVs on in the backyard and paid the $10.99 to stream it live. I had a little barbecue, watched an XFL game on one TV and watched Julia on the other TV.

Richey won, keeping her 11 bucks and etching her name into the Newbury Park history books.

“I want to hopefully inspire other girls to say, ‘I can do this, too. I want to wrestle as well,’” Richey said.

Stephen Thompson Says He Was the “Wrong Guy” for Vicente Luque...

Home crowd thrilled by magnificent judo on Day 1 of Antalya...