Tyrone Spong never expected so much attention to come from what was intended to be an under-the-radar ring return this weekend.

The combat sports veteran—a former prize kickboxer who also dabbled in mixed martial arts—and current unbeaten heavyweight prospect fights for the first time in 2019 as he faces Ecuador’s Jeyson Minda (14-1-1, 8KOs) in a scheduled eight-round contest. The heavyweight heat headlines a low-key card taking place Saturday evening in Merida, Mexico, only for the show to take on an entirely new dynamic.

With a win, the 33-year old from Miami, Florida by way of Suriname is expected to be announced as the next opponent for unbeaten former World cruiserweight champion Oleksandr Usyk (16-0, 12KOs)—who is campaigning at heavyweight on Oct. 12 at Wintrust Arena in Chicago, Ill. 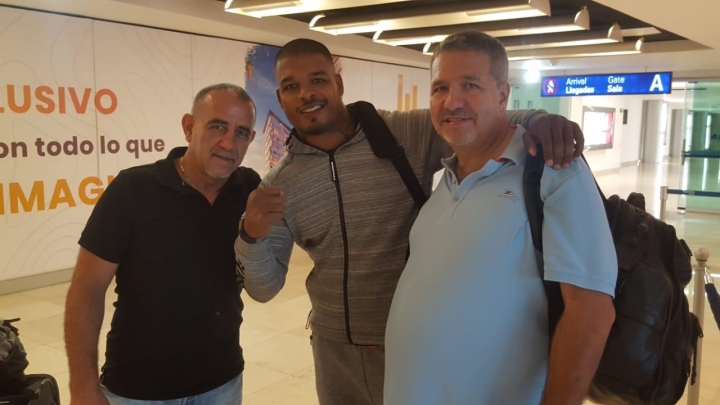 Such a fight has yet to be formally announced or even teased by Usyk’s handlers—and for the moment, not even acknowledged by the rumored frontrunner to land the assignment.

“We’re just working hard, ready for this fight,” Spong (13-0, 12KOs) told BoxingScene.com about his clash versus Minda, not at all thinking about Usyk or anyone other than the task at hand.

Injuries have kept Spong out of the ring for most of the year to this point, although he’s done his best to remain fighting fit. The 6’2” knockout artist weighed 227.1 pounds for Saturday’s assignment, his lightest weight in more than two years.

Interestingly, he enters this weekend’s fight on the heels of his lone distance win to date, going 10 rounds in a split decision victory over Ytalo Perea last December in his birthtown of Paramaribo, Suriname. He’d never previously fought beyond the 5th round in a given prizefight but is prepared to go eight hard rounds on Saturday, regardless of whatever opportunity lies ahead.

“We can talk more after (Saturday),” Spong coyly noted about his future.

For the moment, Saturday’s six-fight card—which is presented by A&T Promotions—will not be carried by any televised outlet or streaming platform.

Kicking her way to success – The Asian Age

Work out under infrared light at new studios

nomad - September 14, 2019
0
KENILWORTH, NJ- Karate World is a martial arts and fitness studio that has been teaching Taekwondo and Muay Thai kickboxing classes since 1991. Taekwondo...