His fight with Chazz Witherspoon was never going to serve as a proper gauge, but Oleksandr Usyk gained enough from Saturday’s win to confirm his intentions in the heavyweight division—moving towards a title shot as quickly as the process will allow.

Ukraine’s Usyk enjoyed a successful heavyweight debut with a one-sided stoppage of Chazz Witherspoon, a 38-year old heavyweight from Paulsboro, New Jersey who was forced to retire on his corner stool after seven rounds Saturday evening at Wintrust Arena in Chicago, Illinois. Both boxers checked in at a career heaviest weight, Usyk by design at 215 pounds and Witherspoon at 242 simply due to it being the best shape he could get into after taking the fight on five days’ notice.

Little was revealed as to whether Usyk can take a heavyweight punch or how his own power will affect bigger opponents at the top level. Of course, as much was understood as things will change in a hurry for the former World cruiserweight champion, including his own physical dimensions.

“I believe I will add more weight for my future fights,” Usyk (17-0, 13KOs) stated during the post-fight press conference following what will likely serve as his lone fight of the year. “Coming in heavier isn’t a problem but I want to do it the right way, to make sure I don’t lose any of my speed.” 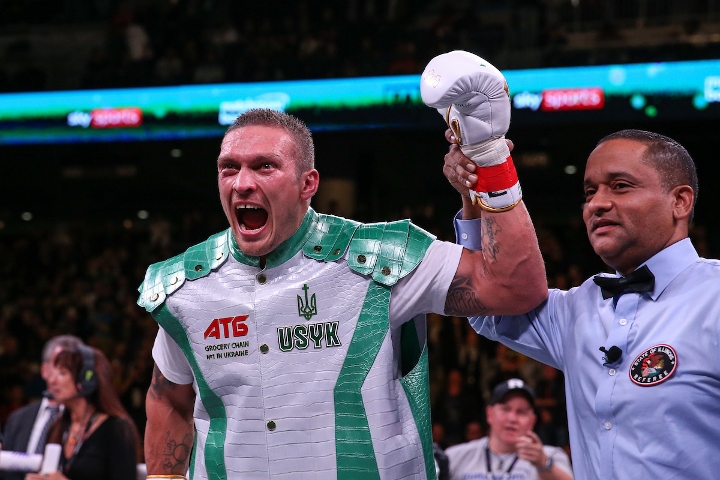 According to promoter Eddie Hearn, the next targeted fight for Usyk will involve a major title at stake. Andy Ruiz currently owns most of the relevant hardware at heavyweight, all of which will be at stake in his Dec. 7 rematch with Anthony Joshua, whom he bested in a 7th round knockout this past June.

While the dream fight for the winner is an undisputed showdown with unbeaten titlist Deontay Wilder, whomever prevails in the rematch will be faced with hard choices. Waiting in the wings will be two mandatory challenger—Kubrat Pulev for the International Boxing Federation (IBF) title, and Usyk as the top-rated World Boxing Organization (WBO) heavyweight contender.

The expectation is for the winner to vacate one of the titles, forcibly or otherwise. Should it be the WBO title, Usyk could actually wind up fighting the loser of the fight or even former titlist Joseph Parker. Everyone in that equation—along with and especially Wilder—hit much harder than Witherspoon, who was held to less than 3 landed punches per round.

Of course, the idea in moving up wasn’t to absorb more punishment but to apply his stellar skills exhibited in his cruiserweight reign into a formidable run at the heavyweight level.

“The difference between cruiserweight and heavyweight is the dynamics,” admitted Usyk, who sported a bruise under his right eye. “I can feel the power more at heavyweight, due to the (opponents) being heavier.

“I think the best way of avoiding heavyweight power is to defend myself better, not to get caught with those big punches.”

Age of Dragons in Beijing

Need to Locate Neighborhood Cookware Single Ladies With regard to Marriage?