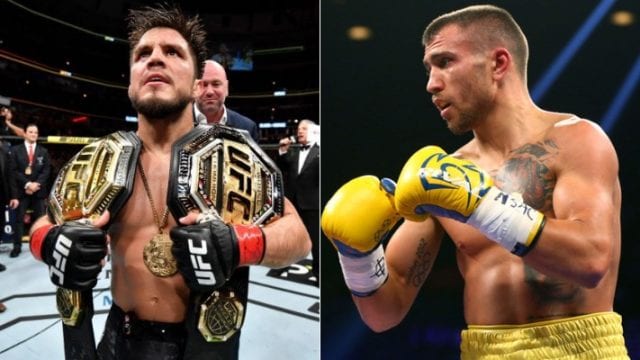 “The King Of Cringe” took to Twitter shortly after the bout to issue out a challenge of his own to a boxing World Champion. Cejudo issued out the challenge to unified lightweight champion Vasyl Lomachenko:

Lomachenko was quick to respond with the following:

Cejudo comes off a big win over Marlon Moraes to capture the vacant 135-pound title. Now, he reigns as both the 125 and 135-pound champion of the Las Vegas-based promotion. Not to mention he’s a former Olympic Gold Medalist wrestler. Unfortunately, “Triple C” is likely to miss the remainder of 2019 with a shoulder injury.

As for Lomachenko, he remains one of boxing’s pound-for-pound best fighters in the world. In his last outing, he successfully retained his WBA (Super), WBO, and The Ring lightweight titles. Lomachenko knocked out Anthony Crolla in the fourth round of their April meeting.

“The Matrix” seems to have taken an interest in Muay Thai training, so perhaps a fight with Cejudo isn’t too far off.

Kickboxing match leads to spike of Coronavirus in Thailand

ONE Championship: Masters of Destiny Results