Deontay Wilder is more concerned with the rematch in front of him than the one waiting in the wings.

That is, if there’s still a rematch in waiting by the time he takes care of business in his next fight.

The unbeaten heavyweight titlist remains hard on the grind for his Nov. 23 showdown versus Miami’s Luis Ortiz (31-1, 26KOs; 2NCs), which airs live on Fox Sports Pay-Per-View from the MGM Grand Garden Arena in Las Vegas, Nevada. The two locked horns last March, with Wilder surviving a major scare late in round seven to drop and eventually stop the Cuban southpaw in the 10th round of their instant classic. Nine months later came Wilder’s next title defense, a disputed 12-round draw with England’s Tyson Fury, whom he decked twice but was forced to hear the final scorecards. 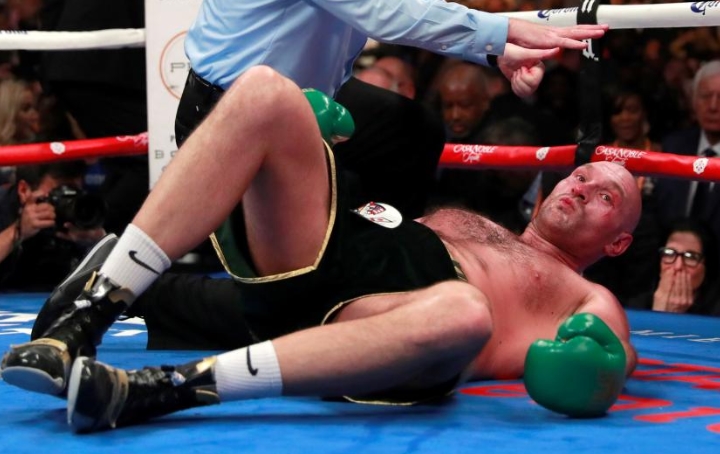 Plans were in place for an immediate rematch, only for Fury (29-0-1, 20KOs) to balk at the 11th hour and instead sign a deal with Top Rank and ESPN+ which put his career on a different path. The two sides have since been able to revisit such talks, with a reported agreement in place to fight in the first quarter of 2020, although there now exists the belief that the hulking Brit will once again head in another direction.

“Fury don’t want it, I don’t think he ever wanted it,” Wilder (41-0-1, 40KOs) stated without hesitation during a media workout Tuesday evening in Northport, Alabama. “A lot of people gave him sympathy for mental illness that he suffered… but the reality is that it’s something that nine out of 10 of us have to face all the time. Being that he was from another country and going through this… in America, we always feel sort for people, especially when they not from this country. I had people even come to me and say, ‘I wanted him to win, I’m not gonna lie, because of his story.’ Everybody want a winning story.

“He wanted to come here and fight me (last December), say he fought me, and people give him a moral victory. He want to go and run with that. I don’t think he ever wanted the rematch becauser I have power. I look at it over and over, even when I look at my fights, I look at it as a fan. How he got dropped, his eyes rolling to the back of his head, his neck getting stretched out like that… his family don’t want it, his wife don’t want to see it, his brothers, his dad don’t want to see it. Dad even said he’s not getting up this time and I guarantee you that.”

Fury faced Wilder three fights into his comeback which began last June following a 31-month exodus from the sport due to a drug suspension as well as conquering substance abuse addiction and mental health issues. The unbeaten former lineal heavyweight champion has fought five times in all since his return, including wins over a pair of unbeaten—though unheralded—foes in Tom Schwarz and Otto Wallin.

Despite already once walking away from planned rematch, Fury has repeatedly insisted his every intention of doing it all again, going as far as to guarantee a knockout ending the next time they meet.

Never mind the prediction, the act of his getting in the ring still remains in question on the other side.

“When you have to go back and the only thing you can promote is you getting up, as a fighter you don’t want to feel that again,” insists Wilder. “You just don’t want to get hit in the face and see your body on the canvas. Lives are being taken in this sport.

“So, you know, I can understand him running. He can run, run, run as far as he can, you know what I mean. But you gotta remember, he signed the contract, you know what I mean. And when you sign something, everybody know that the pen is a silent warrior. You gonna have to pay consequences for getting out of that. The fight will happen, unless they give us some money.”

Boxing and yoga workout studio takes classes outside in Birmingham

nomad - October 13, 2019
0
The St. Louis Blues return home following a four-game road excursion. It was a so-so effort for the Blues, as they won the...

Which Asian celebrity couple had the saddest break-up of 2019? –...